As the Executive Director of the Association of African American Museums (AAAM), nothing excites me more than to see our museums and cultural institutions collaborating to impact not just their respective communities but also communities across the nation. Collaboration and community are the keys to success in our field. Witnessing several of our institutional museums come together to honor the origins of Juneteenth is something to celebrate and commend. www.BLKFreedom.org is one of the many examples of collaboration our AAAM members do throughout the year, and we are truly fortunate to be able to support our members in ways that best suit their needs. In addition to Juneteenth festivities, we have seen several members collaborate locally to commemorate Martin Luther King, Jr Day, Black History Month and create programming that commemorates their State’s respective emancipation days. We’re thankful that AAAM members continue to carry the torch and shine a light on the rich stories of African American history and culture. It’s an honor to be at the Association’s helm and witness our members’ collective growth, strength, and tenacity as we’ve had to combat a double-pandemic (COVID-19 and social injustice). I’m genuinely proud of the work we do and continue to do in the face of adversity. We welcome all AAAM members to share their events with us through our member portal: https://blackmuseums.org/events/

Please take a moment to read a special message from AAAM President, LaNesha DeBardelaben, as she discusses why this project is so important for Black museums (as indicated through a blog post at AAM). 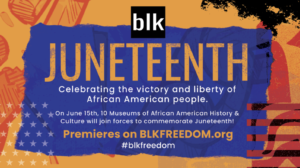 African American museums across the country bear a glorious responsibility to educate and engage, to inform and inspire, to bring together and build. As anchors for this engagement throughout the year, we celebrate cultural holidays, from King Day in January to Kwanzaa in December, embracing them as opportunities to celebrate heritage and inspire hope. In the middle of the year lands Juneteenth, a festive cultural holiday that reminds all Americans to remember the past, reflect upon the present, and renew ourselves for the future. Juneteenth is all at once a historical event, a cultural commemoration, and a reminder. It reminds us to be vigilant and to live out the words of Dr. Martin Luther King, Jr., who said, “None of us are free until we are all free.”

It was on June 19, 1865, that the enslaved people of Galveston, Texas, learned they were free. The news arrived more than two years after President Abraham Lincoln issued the Emancipation Proclamation, and months before the Thirteenth Amendment officially abolished the institution of slavery. One of many important milestones in the nation’s long journey toward emancipation, June 19 is unique in that it does not commemorate a legislative or bureaucratic achievement, but a community celebration of when the last of the enslaved people in the United States finally learned they were free.

African Americans have commemorated this date for 155 years, but the video-captured murder of George Floyd in May 2020 ignited a nationwide racial reckoning and sparked renewed interest in Juneteenth among more Americans than ever before. Many people across the nation discovered Juneteenth for the first time in 2020, and they channeled it as an opportunity to rise up against systemic injustices. Against the backdrop of 2020, Americans saw Juneteenth with new eyes, as an inflection point for asking important questions of ourselves and our society: What does freedom really mean? How long will injustice and inequity be the reality in America? What can I do to make change?

This renewed interest was an opportunity for Black museums, but we had to figure out how to seize that opportunity while contending with the public health cialico.com guidelines that had forced museums to close our physical doors and rethink our approach to programming. So, I met with Ahmad Ward, Executive Director of the Historic Mitchelville Freedom Park in Hilton Head Island, South Carolina, and together we developed the idea of joining forces to host a national virtual collaboration uniting Black museums in celebration of Juneteenth.

In 2020, amidst COVID-19 realities and social justice aspirations, the inaugural national virtual Juneteenth collaboration brought a sense of cultural inspiration and historical information to communities across the country. Through robust media partnering, over ninety-two thousand people tuned in to the production, which featured appearances by the first African American Secretary of the Smithsonian Institution, Lonnie Bunch, the first African American Librarian of Congress, Dr. Carla Hayden, as well as notable historians, spoken word artists, and other luminaries. The conversations held in homes and offices as people tuned in to the production helped to educate and empower viewers.

This year, what started as an idea for virtually uniting communities in lockdown has grown to an ongoing collaboration between ten of the nation’s premier Black museums. On June 15, Northwest African American Museum (NAAM) will join forces with nine other Black museums across the nation to commemorate Juneteenth and celebrate our shared mission to preserve and uplift Black history and culture with a virtual event, Juneteenth: Lift Every Voice. Unifying under the name of BlkFreedom Collective and around the theme “Lift Every Voice and Sing,” together we will commemorate the 156th anniversary of Juneteenth via a nationally televised virtual program featuring vibrant cultural and educational activations. Each museum has selected a theme from the Negro National Anthem, “Lift Every Voice and Sing,” to guide their short video contribution. As part of the program, NAAM will debut our new African American Cultural Ensemble (ACE), a choir that will explore the theme of hope with a multimedia performance. The virtual event will also feature guest appearances by members of the Congressional Black Caucus reading excerpts of the Emancipation Proclamation, as well as luminaries Dr. Johnnetta Cole and Lonnie Bunch reading excerpts of the Fourteenth and Fifteenth Amendments.

Museums serve as messengers. They memorialize moments and inspire movements. Our national virtual Juneteenth program hosted by a visionary network of African American museums this year aims to do all of this while uplifting the collective voice of our nation’s Black communities. For years, Black museums across the nation have stood as gathering places for heritage and hope in communities. It is within Black museums that history and destiny converge. It is there that we make sense of the painful past and envision a brighter future. By preserving the stories and traditions of our shared culture, Black museums inspire positive action in the present and help to shape the meaning of major inflection points like Juneteenth for future generations.

After years of community celebration and advocacy, Juneteenth is finally gaining traction as more states and companies designate it an official holiday. Today, forty-seven states and the District of Columbia recognized Juneteenth as a state or ceremonial holiday. Far fewer, however, recognize Juneteenth as an official, paid holiday for state employees. This year, NAAM supported the passage of legislation in the Washington State Legislature to make Juneteenth an official holiday in Washington, making it just the sixth state in the nation to observe Juneteenth in this way. Efforts to elevate Juneteenth to a federal holiday have been in the works for years as well, starting first with U.S. Rep. Barbara-Rose Collins, D-Michigan. Introducing a bill petitioning to make Juneteenth a federal holiday in 1996, Rep. Collins said, “We must revive and preserve Juneteenth not only as the end of a painful chapter in American history, but also as a reminder of the importance of preserving the lines of communication between the powerful and powerless in our society.” The lessons of the past can be used to make America a more equitable and just place for all. By uplifting communities, teaching a more inclusive American history, and preserving cultural milestones like Juneteenth, African American museums are illuminating a path to do just that. 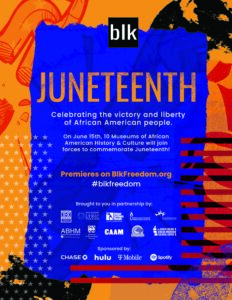