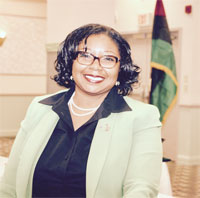 LaNesha DeBardelaben is President & CEO of the Northwest African American Museum (NAAM) in Seattle, Washington. Under her leadership, NAAM is repositioning itself for accelerated growth.  Prior, she was Senior Vice President of Education & Exhibitions at the Charles H. Wright Museum of African American History in Detroit, Michigan. Her 15+ year career in museums began at the National Museum of Kenya in Africa in 2001, and she has studied museums and libraries internationally in Ghana, South Africa, England, Germany, and Israel.