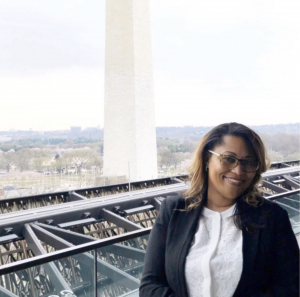 On February 29, 2019, the Board of Directors of the Association of African American Museums (AAAM) announced Vedet Coleman-Robinson as its next Executive Director. Coleman-Robinson’s hire came on the heels of AAAM’s 40th Anniversary year, during which the all-volunteer Association embarked on an ambitious fundraising effort to bring on this full time staff member. With generous support from its members, long-timer sponsors, and a three-year, $400,000.00 grant from The Andrew W. Mellon Foundation, AAAM was poised to grow and continue its important role serving the black museum field.  Since the receipt of the 2018 Andrew W. Mellon Grant, AAAM has increased over membership 200% and over $3 million has been raised for the association, under Dr. Coleman-Robinson’s leadership.

Coleman-Robinson comes to AAAM from the National Park Service (NPS) where she served for eleven years as a Grants Management Specialist within the State, Tribal, Local, Plans & Grants Division (STLPG). During her time at the NPS, Vedet was the Program Lead for the Historically Black Colleges and Universities Grant (HBCU) and the Underrepresented Community Grant programs for STLPG.  She has devoted herself to helping bring voice to communities that lacked representation in the fabric, space and time of American history, and was the subject-matter expert in the STLPG Division on the policies and procedures of museums who were awarded grants. In her eleven years with the NPS, Vedet worked closely with numerable grantees to help preserve their stories through grant programs such as Save America’s Treasures, African American Civil Rights, HBCU, Preserve America, Underrepresented Communities, and the Native Graves Protection and Repatriation Act (NAGPRA).  She also served in leadership roles within the National Park Service’s Employee Resource Groups to help foster and promote relationships and visibility of employees and sites that are underrepresented within the National Park Service and was often called upon for historic research studies that pertained to African American history and culture. Coleman-Robinson is a long-time and life member of AAAM and has played an important role growing the ranks of the Association’s members, through her role on the Membership Committee.

Prior to her role at the NPS, Vedet worked for and with several museums within the DC Metro Area and helped to either create diversity plans for Board of Directors, visitors, and staff, social media fundraising plans, facilitated stakeholders meetings and assisted in the overall sustainability of several programs and grants. Of particular note, she highlights the following as significant accomplishments:

-The Reginald F. Lewis Museum of Maryland African American History and Culture – Co-curated the museum’s inaugural community exhibition as well as collected materials and built relationships throughout the State of Maryland for the museum.

-National Electronics Museum – Increased Board diversity and helped the museum appoint the first African American to the Board.

“Vedet has the professional experience, intelligence, and visionary leadership AAAM needs to take its next evolutionary step forward, “said Brian J. Carter, Board President and Chair of the Hiring Committee.“AAAM recently completed a National Needs Assessment, created a four-year strategic plan responding to the Assessment, and we are now poised to support Vedet as she expands programming and services that will address those needs expressed by the field.”