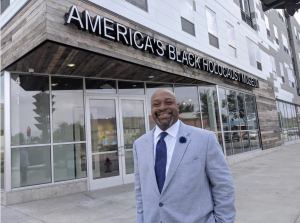 Dr. Robert (Bert) Davis is the President and CEO of the America’s Black Holocaust Museum. Dr. Davis brings an extensive background in nonprofit museum management, education, and fundraising to the AAAM Board. Most recently, he was Principal of the nonprofit strategic consulting firm DRMD Strategies, LLC and former President and CEO to two Iowa organizations: the Dubuque County Historical Society and the National Mississippi River Museum & Aquarium. He is also the former President and CEO of the Zoological Society of Milwaukee. During his tenure there, Dr. Davis secured a $6.7 million donation, the largest foundation gift the Society had received to date. Prior to the Zoological Society, Dr. Davis was Vice President of Education for Chicago’s Lincoln Park Zoo. His previous leadership roles also include Vice President of Education at Lincoln Park Zoo in Chicago, Director of Education and External Affairs at Zoo Atlanta, and he was the first African American to serve as a Supervisory Veterinary Medical Officer at the Smithsonian’s National Zoological Park Department of Animal Health in Washington, DC.

Dr. Davis earned his Bachelor of Science degree in animal and poultry sciences and completed two years of graduate study in cytogenetics at Tuskegee University. He then entered Tuskegee University’s School of Veterinary Medicine from which he received his Doctor of Veterinary Medicine degree. Dr. Davis is a member of Alpha Phi Alpha Fraternity, Inc.

Bert currently serves AAAM as Chair of the Development Committee.