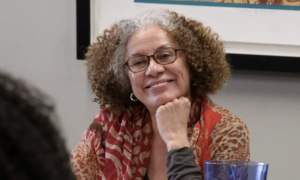 Miriam E. Jiménez Román, the Puerto Rican archivist, social theorist, scholar, lecturer, writer, editor, and invaluable mentor to generations of young academics, activists, and artists exploring the African diaspora in the Caribbean, Latin America, and the United States, passed away in her home in Cabo Rojo, Puerto Rico on August 6th, 2020. She was 69.

Jiménez Román was known widely for her volume The Afro-Latin@ Reader: History and Culture in the United States (Duke University Press, 2010), which she co-edited with her long-time collaborator, interlocutor, and partner, the late Dr. Juan Flores, a faculty member at New York University at the time of his passing. Jiménez Román’s contributions to the documentation and the public’s education of Latin@s in the United States, Latin@s of African descent transnationally, and the politics of race in empire began in El Barrio, the large Hispanophone community on Manhattan’s upper east side also known as Spanish Harlem. Born in Aguadilla and spending her first years of life in San Sebastián, Puerto Rico, Jiménez Román cited her family’s working class migrant experience in New York as providing the initial context for her understanding — and, eventually, critique — of racial discrimination, sexism, and classism in the world she was expected to navigate.

The oldest of four sisters, with a father employed in hard labor who regularly faced workplace discrimination, and a mother who encouraged her eldest daughter’s love for reading and thinking, Jiménez Román learned early on to be an effective and creative problem solver — a skill she developed as a student in Manhattan’s High School for Art and Design. After high school, Jiménez Román first received a scholarship to study painting and sculpture in Vermont, but eventually enrolled in Harpur College of Arts and Sciences at Binghamton University in 1974, where she earned a bachelor’s degree in sociology with a certificate in Latin American and Caribbean Area Studies. She spent a year studying at the University of Puerto Rico – Rio Piedras during her undergraduate years, where she played basketball and first felt the stark difference of being a young, Black Nuyorican woman in the island society that she and her parents left years prior. “A lot of the work that I’m doing today had been part of that experience [in Puerto Rico],” she remembered: “…my parents had been sold a bill of goods that had nothing to do with reality, and that’s what sustained them [but] it couldn’t sustain me.”

After completing coursework in the doctoral program in sociology at the State University of New York – Binghamton, Jiménez Román opted instead for a career that intersected with academia and kept her connected to the community with which she most identified. Spanning the United States and Puerto Rico,  Jiménez Román held posts as Assistant Director of the Office of External Resources at the InterAmerican University in Puerto Rico (1982-83), Managing Editor/Editor of the CENTRO Journal of the Center for Puerto Rican Studies at the City University of New York (CUNY) – Hunter College (1998-2001), General Coordinator of the Afro-Latin@ Project of the Latin American and Latin@ Studies Program at CUNY’s Queens College (2005-2006). Starting in 1987, Jiménez Román began a long professional association with the Schomburg Center for Research in Black Culture in central Harlem, the New York Public Library’s specialized archive and cultural center.  As Research Coordinator and Curator of Exhibitions and Special Programs (1987-1997), Assistant Director of the Scholars-in-Residence Program (2001-2004), and a Scholar-in-Residence (2010-2011), Jiménez Román worked with acquisitions, organized special events, and served as coordinator and curator for dozens of  international exhibitions and conferences on the African diaspora, including: “Legacy of Arthur A. Schomburg: A Celebration of the Past, A Vision for the Future” (1986); “Marcus Garvey: The Centennial Exhibition” (1987); “The French Revolution and the Americas: Prelude to the Haitian Revolution” (1989); “The Haitian Revolution: Its Repercussions in the Americas” (1989); “Dechoukaj: The General Uprising in Haiti, 1986–1988” (1989); “Mississippi Freedom Summer: A 25-Year Retrospective” (1989); “Survival and Resistance: Black Women in the Americas” (1989); “African Presence in the Americas: 500 Years of Tradition and Transformation” (1991); “African-Americans and American Politics” (1992); “Imaging Blacks: African-Americans in American Film” (1993); “Enduring Traditions: Visions in African Art” (1995); “Shona Sculpture of Zimbabwe: The Spirit Within” (1995, Coordinator); “Arturo Alfonso Schomburg: Race Man” (1996); and “Bearing Witness: African American Vernacular Art of the South” (1997).

It was during her tenure at the Schomburg that she met Juan Flores, then a faculty member in the Department of Africana and Puerto Rican/Latino Studies at CUNY’s Hunter College, with whom she would found the Afro-Latin@ Project in 2005 — an informal collective of academics, students, and community activists engaging in advocacy on behalf and organizing events devoted to Afro-Latin@ identity — first at CUNY and then (after being renamed the Afrolatin@ Forum by 2007) at New York University. She would serve as the Executive Director of the Afrolatin@ Forum up until her time of passing.

The Forum’s mission for its members, according to Jiménez Roman, was directed at offering Afro-Latin@s “another paradigm [for] . . . [and] a validation of who you are, as opposed to what you’re supposed to do to be a success. . . . The rules were not set up for you. You have to question those rules . . . That’s why Juan and I emphasized critical thinking [because] Latinidad does not protect you from the injustices experienced by Black people in the United States.” Her unflinching leadership, brutal honesty, critical insight, and wealth of life experience as a (self-described) lighter-skinned Black Latina — and a true Nuyorican — undergirded her work with the Forum. She oversaw the development of the Afro-Latin@ Reader and led the organization of the Forum’s two international conferences, Afro-Latin@s Now!: Strategies for Visibility and Action in 2011 and Afro-Latin@s Now: Race Counts! in 2014. Jiménez Román maintained that the Forum should intentionally blur the boundaries between research, education, and activism, and the Forum’s many initiatives have since made interventions, culturally and politically, by promoting new scholarship and research, developing resources, publishing service announcements, and organizing cultural programming on how race is measured for Latin@s in the United States.A consummate and iconoclast thinker, teacher, editor, and accessible mentor to many young, Black and Latin@ students (young women especially), Jiménez Román championed the study of Afro-Latin@ life in the United States in its many forms. As a visiting scholar and lecturer at SUNY Binghamton, Columbia University, Brown University, and New York University, she designed and taught innovative courses on Latin@s and race. She was also the author of dozens of visionary and germinal articles on Latin@s and Blackness that challenged standard promulgations of a Latin@ racial democracy: “Un hombre (negro) del pueblo: José Celso Barbosa and the Puerto Rican Race Toward Whiteness” (Centro: Journal of the Centro de Estudios Puertorriquenos, 1996); “The Indians are coming! The Indians are coming!: Taínos, Race, and Puerto Rican National Identity” (In Taino Revival: Critical Perspectives of Puerto Rican Identity and Cultural Politics, 2001); “‘Looking at that Middle Ground: Racial Mixing as Panacea?’  Challenges to Latin American and Caribbean Racial Discourse” (Wadabagei, 2005); “Boricuas vs. Nuyoricans—Indeed!: A Look at Afro-Latinos” (Puerto Rico: The Island and Beyond, ReVista, The Harvard Review of Latin America, 2008); “Real Unity for Afro-Latinos and African Americans” (2008); “Check Both! Afro-Latin@s and the Census” (VidaAfroLatina: News and Views by and About Black Latinos, 2010). Her work made her a sought-after lecturer who traveled internationally, and she emphasized the transnational connections characteristic of the African diasporic experience across the Americas in each public address. Jiménez Román co-founded and served as editor of the Palgrave Macmillan Afro-Latin@ Diasporas book series devoted to scholarly and creative writing on the African diasporic experience across the Americas. Most recently, she saw to fruition the Black Latinas Know Collective, a group that gives platform to the knowledges that Black Latina scholars bring to the study of race within Latinidad and Blackness.

Jiménez Román’s intellectual and political commitment and service to her community reached inside and transcended well beyond the halls of academia. She was guided not only by a passion for restorative justice, but by a deep and profound sense of integrity. She showed those with whom she worked, through example, that a true and just politics — the work necessary to make the world a better place for the disenfranchised — could not be achieved by flashy academic rhetoric and self-interested posturing; that real, progressive change only comes from honesty, tenacity, and unwavering conviction.

She leaves behind a towering and permanent legacy of work that expanded the visibility and uncovered the rich history of Black Latin@s across the Americas. Those who knew her well will miss a woman of inimitable brilliance, and remember with great fondness her razor-sharp wit, unparalleled cooking, and capacious heart.