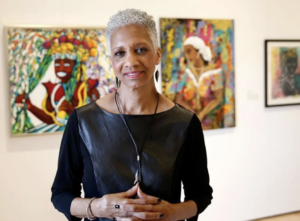 Adele C. Johnson pushed to ensure the Black History Museum and Cultural Center of Virginia lived up to its name during her four-year tenure as executive director.

From concerts to lectures and exhibits, Ms. Johnson led her small staff of three in seeking to make the Jackson Ward-based museum an enticing place to learn more about Black contributions to Richmond and the state during the past 400 years.

“She definitely put us more on the city and state map,” said Mary Lauderdale, who oversees operations and visitor services at the museum, located in a renovated 1890s armory at 122 W. Leigh St.

She described Ms. Johnson as a workaholic for whom “no task was beneath her.” She also had the connections to make the museum a stop for last year’s touring exhibit, “Paradox of Liberty: Slavery at Jefferson’s Monticello,” that focused on the enslaved individuals who labored for Thomas Jefferson, author of the Declaration of Independence and the nation’s third president.

“She was quiet thunder. She was tough but always calm, hands-on and personal,” said Ms. Lauderdale, who teared up as she spoke of Ms. Johnson.

A native of New Jersey, Ms. Johnson succumbed Sunday, April 25, 2021, to pancreatic cancer, her family announced. She was 70.

A service celebrating her life is being arranged, the family stated.

Ms. Johnson gave up her consulting firm to step in as interim executive director of the Black History Museum in 2017 after the previous director left. Ms. Johnson was named to the job permanently within 18 months.

She continued to handle the museum’s management through the pandemic despite her illness, enabling the museum to have an online presence until it could reopen.

“Adele was a beautiful soul who exuded goodness, calm and grace in her interactions with others. Her leadership, vision and passion brought great success to the museum since its reopening in the Leigh Street Armory” in May 2016, stated Dr. Monroe E. Harris Jr., chairman of the museum’s board. “No one could have done more to promote the museum and encourage us to tell ‘stories that inspire.’ Adele’s loss is immeasurable.”

Public historian Elvatrice Belsches seconds that view. “No institution or organization will have a greater champion,” stated Ms. Belsches, who was commissioned by Ms. Johnson to serve as a guest curator, museum educator and adviser on several projects, most notably a photographic exhibit from 2017-2018 that Ms. Johnson titled “Yesterday’s Stories, Today’s Inspirations.”

Ms. Johnson “worked alongside us in every facet of that project as she did on countless others” in which she “endeavored to amplify lesser-known stories,” Ms. Belsches stated.

Ms. Johnson was “imbued with the uncanny ability to make everyone in her presence feel that they mattered greatly,” Ms. Belsches continued. “She always exhibited integrity, wisdom and grace in her efforts to create exhibits and projects that, in her words, will continue to ‘educate and inspire.’ ”

Born in Sea Bright, N.J., Ms. Johnson came to Richmond to attend Virginia Commonwealth University, where she earned a degree in urban planning.

Before taking on the leadership of the museum that is now marking its 40th anniversary, she built up substantial leadership experience. She

In 2004, Ms. Johnson left the council to become community relations director for Capital One, where she interacted with nonprofits and oversaw grants the company awarded to charities.

She went on to become director of the Richmond Public Schools Education Foundation in 2009, where she led fundraising, handled administrative duties and was involved with creating a mentoring and reading program for first-graders, funded in-school and after-school enrichment programs for middle-schoolers, supported a program to aid high school students preparing for life after graduation and invested in teacher development and classroom resources.

In 2016, she resigned and opened a consulting firm, The Inclusive Edge, with a goal of helping nonprofits operate better and to link “their passion with partners.”

The family requests that memorial donations be made to the Black History Museum & Cultural Center of Virginia, P.O. Box 61052, Richmond, Va. 23261.