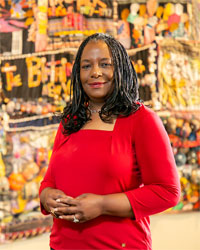 Jacqueline K. Dace is the Executive Director with St. Louis ArtWorks, in St. Louis, MO. She previously served as deputy director of the National Underground Railroad Freedom Center; director of internal affairs and interim executive director at the National Blues Museum; project manager for the Mississippi Civil Rights Museum in Jackson; collections manager at the DuSable Museum of African American History in Chicago; curator of African American history at the Missouri Historical Society and adjunct professor of Afro-African American Studies at Washington University in St. Louis.

Dace is a recipient of the Hollywood Black Film Festival and Kansas City Film Festival Awards, as well as the National Arts Strategies Fellowship. She participated in the inaugural Public History Institute, developed by the Gilder Lehrman Center for the Study of Slavery, Resistance and Abolition and the National Museum of African American History and Culture, held at Yale University. Dace has served as a practitioner with W. K. Kellogg Foundation’s Racial Equity program and graduated from the Jackson Division of the FBI Citizens Academy. Dace also served on the local arrangements committee for the 2017 Annual Meeting of the American Alliance of Museums and is a board member for the Association of African American Museums. Dace was recently selected to participate in the first American Express Women in Music Leadership Academy, 2018, held in New York City, and recipient of the 2019 Ohio Valley Regional Emmy for the documentary. “Mandela: Prepared to Die”.