Telling the Story of COVID-19 and Eviction 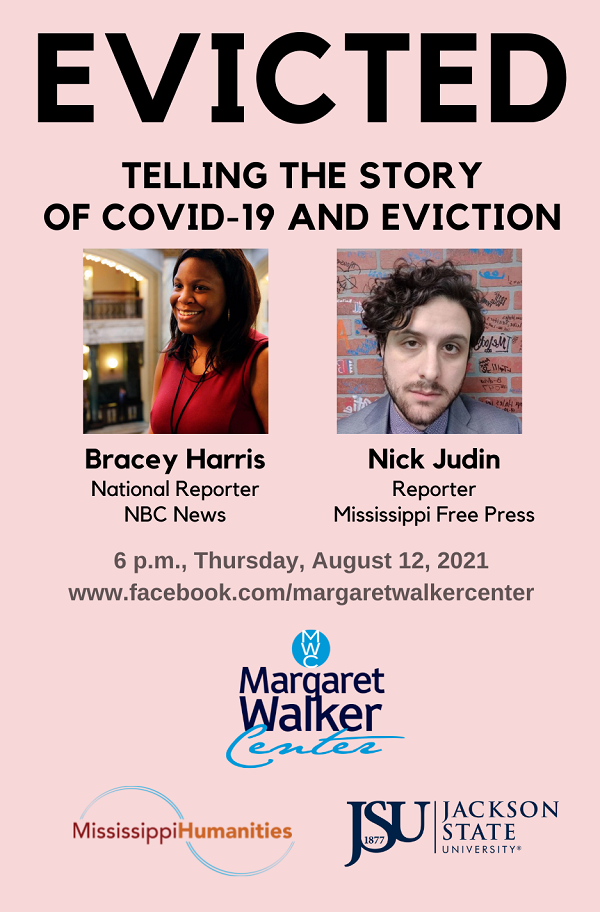 Bracey Harris is a national reporter for NBC News based in Mississippi. Before her current role, she covered education in the Southeast for The Hechinger Report, where she was a finalist for the 2020 Education Writers Association Award for Feature Writing for her reporting on the unfulfilled promise of school desegregation in the Mississippi Delta. Prior to Hechinger, she worked at the Clarion Ledger where she focused on government accountability for the paper’s investigative and enterprise team.

Nick Judin began his career in journalism at the Jackson Free Press in 2019, coming on as State Reporter to cover the 2020 legislative session. That posting quickly gave way to a year leading the JFP’s award-winning COVID-19 coverage. In 2021, he joined the Mississippi Free Press, where his dedicated coverage of the Jackson water crisis was picked up internationally. Nick’s reports from the frontline of coronavirus have repeatedly made national headlines, as he has asked hard questions of state leadership and conducted critical interviews with the state’s top public-health experts.
———————–
In April 2018, the National Building Museum opened a new, “eye-opening” exhibition exploring the causes and impacts of eviction, based on Matthew Desmond’s award-winning book Evicted. Since then, thousands of people have come through the show to learn more about the national eviction crisis.

A stable place to call home is one of the best predictors of success. Yet, each year more than 2.3 million Americans, most of them low-income renters, face eviction. While it used to be rare even in the poorest neighborhoods, forcible removal has become ordinary, with families facing eviction from the most squalid, barely inhabitable apartments. This phenomenon exposes not only income inequality in America, but also the growing separation between the built environments of the rich and the poor.

Housing instability threatens all aspects of family life: health, jobs, school, and personal relationships. Landlords hesitate to rent to those with eviction records, or charge them extra money, causing a devastating negative feedback loop. Children switch schools too often to make friends or be noticed and helped by teachers; neighbors cannot develop bonds; personal belongings are left in storage or out on the street. Americans often take home for granted—home forms the building blocks of community life—and this stability is under attack when eviction looms.

Specially commissioned visual infographics and forward-thinking design introduce visitors to the numbers and statistics they need to know in order to understand the crisis. Rates of evictions in different markets make evident the depths of the problem. Working together, these elements amplify tenants’ voices, as they explain in their own words the impact eviction has on them and their loved ones.
+ Add to Google Calendar+ Add to iCalendar+ Export .ics file