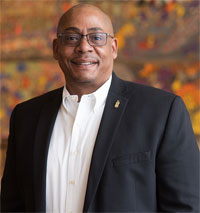 Dion Brown is an accomplished nonprofit executive leader.  He has a proven track record on defining visions, leading teams through strategic planning, conducting analysis of operations and building budgets that work.  Mr. Brown prides himself on building teams and producing programming that will engage the community. He works with board members and staff, to adopt culturally responsive strategies and navigate challenging situations.  Currently he is consulting with NMBL Strategies as the Managing Director for Nonprofit Services.

In February 2018, Brown became the President and Chief Operating Officer of the National Underground Railroad Freedom Center. In the first three months, he analyzed and completed the fiscal year operating budget, reducing it by $1 Million.  As the spokesperson for the institution, he engaged the community, current donors and new donors resulting in a higher visibility for the organization. These efforts led to contributions of over $1Million. He built strong collaborative partnerships with several organizations to include the YWCA, Jewish Federation, African American Chamber, Cincinnati Police Department, and the LGBQT among others.  These relationships were instrumental in securing over $1 Million in funding for the organization.

Brown was the Founding Executive Director of the National Blues Museum from June 2015–February 2018. He helped the start-up grow and flourish, gaining recognition from CNN, National Geographic and the New York Post as a “must see” museum. Prior to his role at the National Blues Museum, he was the Executive Director of the B.B. King Museum and Delta Interpretive Center in Indianola, Mississippi. While museum programming, tours, and attendance greatly expanded under Brown’s leadership, he simultaneously raised funds, balanced the organization’s budget and positioned the organization as a viable business and a strong community resource and champion. In 2013 he was recognized by the Delta Business Journal as one of its “Top Minority Business Leaders.” Prior to his leadership at the BB King Museum, Brown served as the chief operating officer for Exploration Place in Wichita, Kansas. He directed a staff of more than 70 people, and managed the day-to-day operations of the museum and its $5 million budget.

Brown holds a certificate of fundraising from the IUPUI School of Philanthropy, a bachelor’s of science in human resources and a master’s of science in leadership from Southwestern College. He is also retired from the United States Air Force after 21 years of service.