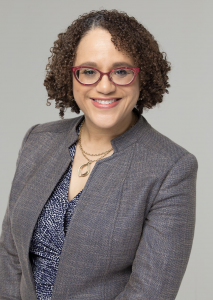 Dr. Dina M. Bennett is the Director of Collections and Curatorial Affairs at the American Jazz Museum in Kansas City, Missouri, and an ethnomusicologist who specializes in African American music and culture. Dr. Bennett most recently served as the Founding Curatorial Director of the National Museum of African American Music in Nashville, the first national institution dedicated to educating, preserving, and celebrating more than fifty music genres and subgenres that were created, influenced, and inspired by African Americans. She has previously served as the Associate Director of the Mulvane Art Museum at Washburn University in Topeka, Kansas; Director of Education at the B.B. King Museum and Delta Interpretive Center in Indianola, Mississippi; and as the Manager of Collections and Exhibitions at the American Jazz Museum (AJM) in Kansas City, Missouri. During her AJM tenure, she oversaw the museum’s temporary and permanent collection exhibitions, and served as the co-curator and consulting ethnomusicologist for the museum’s John H. Baker Jazz Film Collection Exhibition (2009), the first addition to the jazz museum’s permanent exhibition since its opening in September 1997. Originally from Topeka, Kansas, Dr. Bennett earned a Bachelor of Arts degree in Communication Studies from Washburn University, a master’s degree in College Student Personnel from Kansas State University, and a Ph.D. in Ethnomusicology with a minor in African American & African Diaspora Studies from Indiana University. Dr. Bennett has over 30 years’ experience in the music field and is an accomplished pianist. She currently serves on the advisory team of scholars for “A History of African American Music,” an interactive timeline produced as a resource for Carnegie Hall’s 2009 festival “Honor! A Celebration of the African American Cultural Legacy. Dr. Bennett is a member of Alpha Kappa Alpha Sorority, Inc.