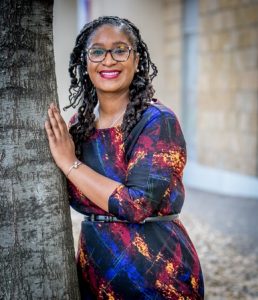 Brenda Tindal is an awarding-winning educator, scholar and museum practitioner. Prior to joining the International African American Museum (IAAM) as Director of Education & Engagement in July 2018, Tindal was the Director of Education at the Detroit Historical Society, where she oversaw the K-16 education initiatives, public programming, and provided organizational leadership in the areas of museum visitor experience and strategic engagement.

In 2003, Tindal launched her career in the museum field at Levine Museum of the New South, in Charlotte, North Carolina, where she was part of the curatorial team that developed Courage: The Carolina Story that Changed America, an exhibit on the region’s role in the landmark school desegregation case, Brown v. Board of Education (1954). The exhibit was awarded the National Medal for Museum Service in 2005—the nation’s highest honor awarded to museums and libraries. In 2015, Tindal became Levine’s first woman and African American, to serve as Staff Historian and Senior Vice-President of Research and Collections.

As staff historian, she served as the lead curator and content developer of the museum’s Splendid Service: Camp Greene & the Making of a New South City exhibit and K(NO)W Justice K(NO)W Peace (KJKP)—considered one of the first rapid-response exhibits to place local and national community-law enforcement relations into historical and socio-cultural context. As part of the KJKP project, she designed, lead, and/or implemented several successful public programs and community initiatives, including the Breaking Bread Dinner & Dialogue series; the #KNOWCLT civic and corporate enrichment seminars; Listen UP! Charlotte mobile concert series (w/Charlotte Symphony and Sign of the Times Jazz Ensemble); the Queen City Quiz Show (w/Creative Mornings—Charlotte) and was a consultant on The Atlantic magazine’s 2017 Race + Justice Summit in Charlotte, North Carolina.

Tindal is the recipient of numerous awards, including a 2011 Institute of Museum and Library Service (IMLS) fellowship at Princeton University—where she co-curated Your True Friend and Enemy: Princeton and the Civil War exhibit and served as a key researcher for the Princeton & Slavery project.  Tindal has also served on boards, review panels, and provided consultation for the National Council on Public History (NCPH), Institute of Museum and Library Service’s Museums for America (MFA) grant program, Association of African American Museums (AAAM), American Association for State and Local History, Museums & Race, and Museums as Sites of Social Action (MASS), among other museum and non-profit organizations.

In addition to her work within the museum field, Tindal earned a BA in History and Africana Studies from the University of North Carolina Charlotte, an M.A. in American Studies from Emory University, and will graduate with a Ph.D. in History & Culture from Emory University soon. She is completing a dissertation entitled “What Our Common Past Had Done to Us”: Movement Widows in American Public Life, 1940s-2013—a survey of the social and political trajectory of Coretta Scott King, Myrlie Evers-Williams, and Betty Shabazz—activists and widows of martyred civil rights leaders.