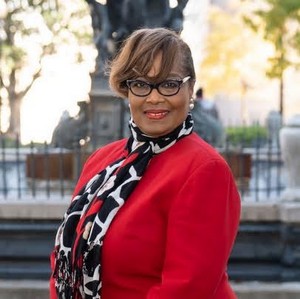 Named one of the USA TODAY’s “Women of the Century” in 2020, Beverly Robertson is the president and chief executive officer of the Greater Memphis Chamber since 2019. At head of the lead economic development organization for the region, she has championed shared prosperity, secured a historic number of jobs and investments, and raised funds to put the Chamber in its best financial position ever.

Before joining the Chamber, Robertson served as president of the National Civil Rights Museum in Memphis from 1997 to 2014. During her tenure, she led the museum in raising $43 million to fund a massive renovation that turned the museum and the attached Lorraine Motel, where Dr. Martin Luther King Jr. was assassinated, into an internationally known destination. She also built the museum’s annual Freedom Awards into a nationally and internationally recognized ceremony, even personally persuading former president of South Africa Nelson Mandela to come to Memphis to receive the award.

A graduate of the University of Memphis, Robertson started her career in education before spending 19 years at Holiday Inn Worldwide, becoming acting vice president of marketing communications.

A graduate of the Wharton School of Business’ Leadership and Management Certificate program at the University of Pennsylvania and has competed the prestigious Getty Museum Leadership Institute in Los Angeles, Robertson serves on several local and national boards. She and husband Howard also own and operate TrusT Marketing. Together, they have three adult children and are also grandparents.