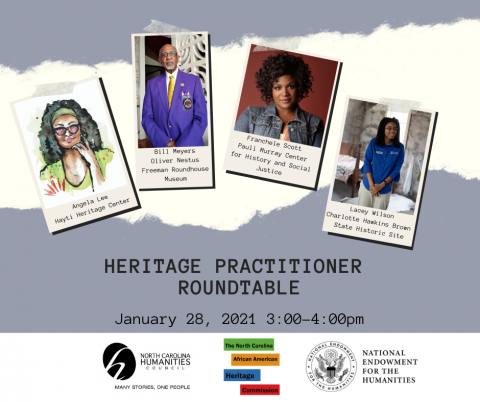 This webinar is the final installment of a six-part Zoom webinar series designed to offer guidance and strategies around how to sustain our institutions in this moment. The series will leverage the expertise of sixteen heritage practitioners from across the country to address numerous topics.

The last year has been a tumultuous time for cultural heritage institutions across the country, including North Carolina.  Join us for a conversation with four leading cultural professionals to learn how their institutions have navigated our difficult times.

Angela Lee is the Executive Director of the Hayti Heritage Center, an historic cultural arts and arts education venue in Durham, NC. The Center serves as a cultural hub for the city’s African American community and provides core programs in visual and performing arts, and offers facility rentals and historic tours. The venue, originally opened as a church in 1891, is listed on the national historic registry.

Lee has served as Executive Director since 2013 and guides the organization in its mission of preserving and advancing the history and culture of historic Hayti and the African American experience through programs that benefit the broader community locally, nationally and globally.

In addition to her work with Hayti, Lee is Chair of Durham’s Cultural Advisory Board and serves on the board of the Mountains-to-Sea Trail, a State supported corporation with a mission to bring together communities and volunteers to build a simple footpath connecting the State’s natural treasures for the enjoyment and education of people.

Lee recognizes that the arts are a critical vehicle for social justice and change. Her advocacy and activism extend beyond her work and into the community she serves and the community in which she lives. Her home is Chapel Hill.

William E. (Bill) Myers, a Greenville, NC native educated in that city’s public schools,
holds the B.S. Degree in Music Education from Virginia State University, a Masters
Degree in Music and a Masters Degree in Education from East Carolina University. He
is a graduate of North Carolina’s first Principal’s Executive Program which was held at
the University of North Carolina at Chapel Hill, and was among the first to graduate
from the Advanced Executive Program at the same institution. He served as a First
Lieutenant in the U. S. Army.

An educator and musician, Mr. Myers is the recipient of numerous honors including the Terry Sandford Award for creativity and innovation in teaching, the BB&T Outstanding Contribution to Community Arts Award, and the NC Folklore Society’s Brown-Hudson Award.  Additionally, in 2015 the Wilson City council named a street for him, Bill Myers Avenue. He co-founded the musical group “The Monitors” who have served as the back-up band for numerous artists included Otis Redding, and Millie Jackson, Roberta Flack was at one time their lead singer. Known as the “Father of the African American Music Trial in Eastern North Carolina”, he was the first selected to begin the eight-county program. He currently serves as the Executive Director of the Oliver Nestus Freeman Roundhouse Museum.

Frachele Scott is a native of Oxford, NC. She began studies at the University of North Carolina at Chapel Hill.  She received her B.A. in Political Science in 1999. She moved to Durham to attend law school in 2001. Scott received her Juris Doctorate from North Carolina Central University School of Law in 2004. For just over a decade, she served as manager of two historic site properties with the NC Department of Natural and Cultural Resources. She currently serves as Managing Director of the Pauli Murray Center for History and Social Justice. She serves as attorney, strategic consultant or board member to several institutions and organizations including the Durham County Alcohol Beverage Control (ABC),Oxford United Investors (OUI) and NCCU School of Law’s Board of Visitors. Her interests include history, horses, and travel.

Lacey Wilson is the Site Manager for the Charlotte Hawkins Brown State Historic Site in Gibsonville, NC where she is honored to continue to tell the story or Dr. Brown and the Palmer Memorial Institute. Lacey holds an M.A. in History with a concentration in Museum Studies from The University of North Carolina at Greensboro (UNCG), where she collaborated on “Etched in Stone? Governor Charles Aycock and the Power of Commemoration,” a permanent exhibition and winner of the 2019 Award of Excellence and the 2019 History in Progress Award from the American Association for State and Local History.  Prior to the Hawkins Brown site, Lacey worked as a historic interpreter at the Owens-Thomas House and Slave Quarters in Savannah, GA. teaching economics and politics in urban slavery from the 1810s to the 1850s. This work was highlighted in The New York Times and on NPR’s 1A radio show.  She is an active member of the National Council of Public History, where she serves on the Advocacy Committee, and the Diversity and Inclusion Committee. Additionally, she is an active member of the Black Interpreters Guild, promoting black interpreters’ work across this country.  Her headshot is courtesy of Hunter McRae, an NYT photographer.