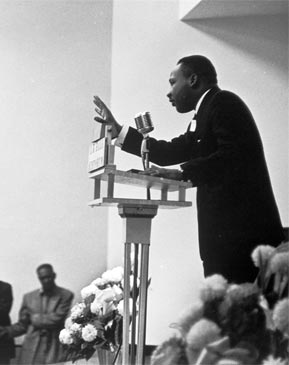 The Center for the Study of African American Religious Life (CSAARL) at the Smithsonian’s National Museum of African American History & Culture will commemorate the life and legacy of the Rev. Dr. Martin Luther King, Jr. In a presentation of soul-stirring words and music, performed by Mr. Darin Atwater and Soulful Symphony, we will pay homage to Dr. King, a global statesman and martyred prophet whose teachings and example continue to illumine the pathway to justice, peace, and love. This event will be streamed live.

About the Evening Concert:
Music played an indispensable role in the Civil Rights Movement. Like the proverbial “drum” in an African village, songs of praise and protest galvanized the community for heroic struggle. Before mass meetings and during long marches, spirituals and freedom songs infused the freedom fighters with courage and steely determination to dismantle Jim Crow segregation. There also was an enchanting musicality in the religiously-inspired rhetoric of the movement’s greatest prophet, the Rev. Dr. Martin Luther King, Jr.  Even to this day, we recall many of Dr. King’s words not only because of what he said but also because of how he said it. From his speech at the March on Washington until his final words at Mason Temple Church in Memphis, Dr. King used rhetorical virtuosity and the sonorous symphony of his voice to inspire the movement and transform the world. Thus, music is a most fitting medium as we commemorate the costly sacrifices of our ancestors and assume their mantle as we sing, “Ain’t gonna let nobody turn me around…marchin’ up to freedom land!”

Co-sponsor: The Center for the Study of African American Religious Life (CSAARL)