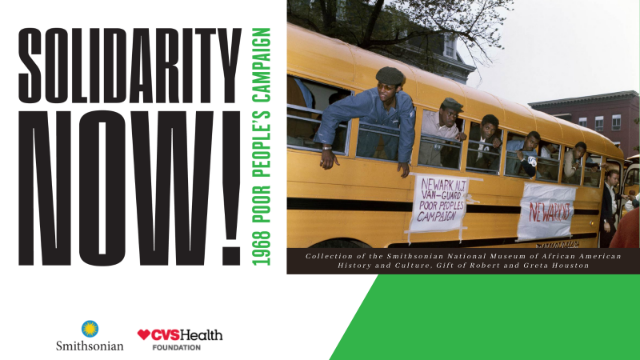 Organized by the Smithsonian Institution Traveling Exhibition Service (SITES) and the National Museum of African American History and Culture, the exhibition is supported by the CVS Health Foundation.

A new traveling exhibition from the Smithsonian illuminates the often-overlooked history of the multicultural movement that confronted poverty and redefined social justice and activism in America. Solidarity Now! 1968 Poor People’s Campaign will begin a national tour at the National Civil Rights Museum at the Lorraine Hotel, a Smithsonian Affiliate. The final crusade of Martin Luther King Jr.’s life, the Poor People’s Campaign was launched in his honor at a memorial service led by Coretta Scott King and Ralph Abernathy at the Lorraine Motel May 2, 1968.

In the 1960s, as the United States emerged as a global model of wealth and democracy, an estimated 25 million Americans lived in poverty. From the elderly and underemployed to children and persons with disabilities, poverty affected people of every race, age and religion. In response, the Southern Christian Leadership Conference, led by King and Abernathy, organized the Poor People’s Campaign as a national human rights crusade.

Solidarity Now! features photographs, oral histories with campaign participants and organizers, and an array of protest signs, political buttons, and audio field recordings collected during the campaign. The exhibition explores the significance of the tactics and impact of this campaign that drew thousands of people to build a protest community on the National Mall in Washington, D.C. For nearly six weeks they inhabited “a city of hope” on 15 acres between the Washington Monument and the Lincoln Memorial to call the nation’s attention to the crippling effects of poverty for millions of Americans. The protest site was called Resurrection City.

Through a 3D map of Resurrection City, visitors can examine the planned spaces for housing, a cultural center, city hall, theater stage, and essential services, including facilities for food and dining, sanitation, communications, education, medical and dental care, and childcare.

My wife asked me to look into medication for my restless leg syndrome a few months ago because she couldn’t fall asleep with me tossing and turning next to her. On https://winters.com/klonopin-2mg/ I found very helpful information pointing me in the direction of Klonopin to alleviate my restlessness at night. Within a week after taking it, we were both sleeping like a baby as soon as we laid down. If you want a good nights’ rest and confidence in going to sleep then I suggest Klonopin as soon as possible.