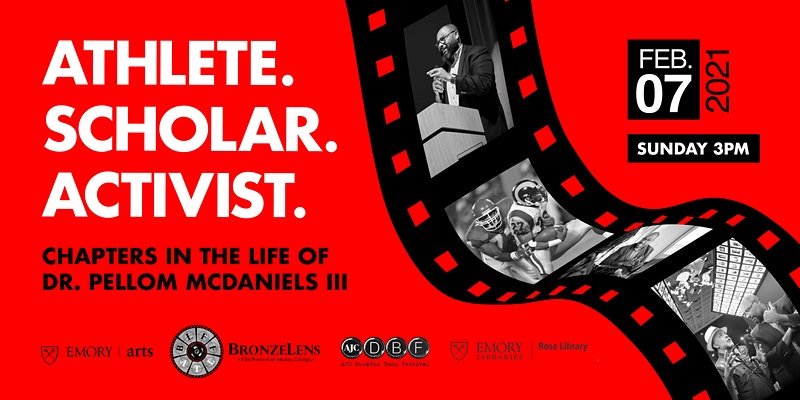 Emory Libraries partners with the BronzeLens Film Festival for this event, which begins with a screening of the film “Flash Here and There Like Falling Stars: The Life and Work of Dr. Pellom McDaniels III,” followed by a conversation.

• Valerie Boyd, journalist, award-winning author, and the Charlayne Hunter-Gault Distinguished Writer in Residence and an associate professor of journalism at the University of Georgia

• Leatrice Ellzy, executive director of Hammonds House Museum in Atlanta and senior director of programming at the Apollo Theater in New York City. She often takes part in arts conversations and has worked at Georgia Public Broadcasting, Woodruff Arts Center, and the National Black Arts Festival.

• Fahamu Pecou, interdisciplinary artist, fall 2020 Emory Arts and Social Justice Fellow, and scholar who worked with McDaniels when Pecou was a student in the doctoral program at Emory University.

• Joe Posnanski, a senior writer at The Athletic. He has been named national sportswriter of the year by five different organizations and has won two Emmys as part of NBC’s digital Olympics coverage. He is the author of five books.

Other guest speakers may be added prior to the event date.

The event honors the contributions of Pellom McDaniels III, former Emory professor of African American Studies and curator of African American collections at the Rose Library who passed away in April 2020. McDaniels, a former NFL player for the Kansas City Chiefs and Atlanta Falcons who earned his master’s and PhD from Emory University, focused his life’s work on researching, collecting, and sharing the stories of African Americans throughout history.

This event is co-sponsored by the Stuart A. Rose Manuscript, Archives, and Rare Book Library, Arts at Emory, and the AJC Decatur Book Festival, presented by Emory University.

You will receive the Zoom link a few days before the event.